Blue Sky High - What If YOU Designed a High School? 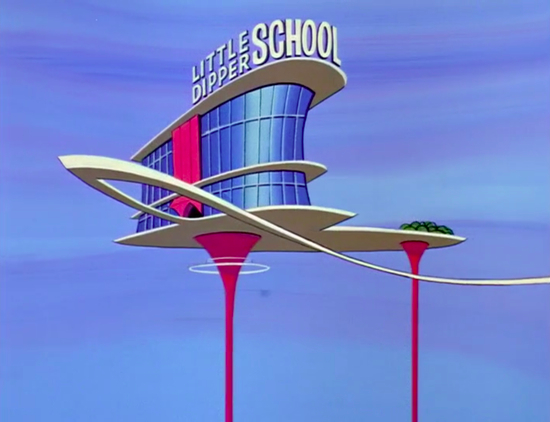 Walt Disney encouraged people to think big. And then he encouraged them to think bigger. He asked them about their blue sky dreams. Look up at the sky. You can't see the end of it. That's how you should dream. There is no limit to how high or how big you can dream.


My blue sky dream is to open a grade 4-12 inclusive, immersive, experiential school that caters to all types of learners and empowers them to be confident life long learners who can solve real world problems. 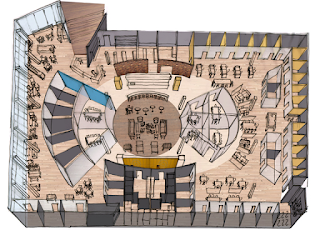 I am researching the current structures and systems of public and private high schools around the world to learn more about how users (students) feel about their experiences there. 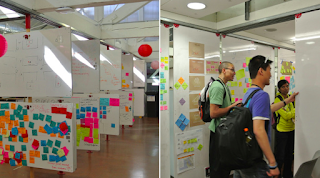 I would love to learn about your high school experiences, what worked and what didn't work for you as a teenage learner.

I would also love to pick your brain about what we could achieve in high school. Imagine that the existing systems and structures were wiped clean and you could learn in a way that works for you. What could high school look like, feel like and empower our students to do? 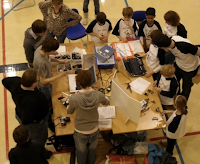 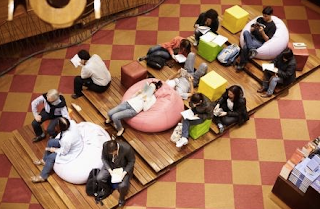 What if formal schooling could be more about preparing learners for their lives than preparing them for more formal schooling (and all that entails, like standardized expectations, a focus on memorization of content and high-stakes testing)? Imagine the possibilities!

One way that I am gathering user input is through a survey. I am also conducting one-on-one interviews, starting an online discussion group (on Voxer) and planning dream-building workshops. If you want to share your experience and ideas, or learn along with me, let me know!

Your input will be helpful for my personal research, writing, educational consulting work and eventual my own eventual Blue Sky High creation.

To start off, I am collecting your thoughts in a quick (5-10 minute) survey. Please fill out the embedded survey (also linked here)

This post includes (creative commons licensed) images that inspire me in my blue sky dreaming about schooling. These were included in a document I shared with artist Jeannette Langmead, in the creation of her masterpiece that is the cover of my book. 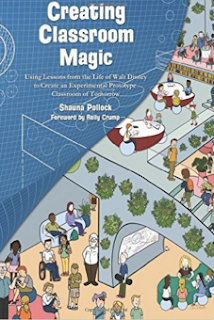 Welcome a Student Teacher Into Your Classroom

Welcome a student teacher into your classroom.

As educators, we have the opportunity and the privilege to elevate our profession. Create a prototype classroom where you and your students can help teachers experiment and improve their skills. Mentor teachers that are new to the profession. Be the person YOU needed (and hopefully had) when you were starting your career.

Teaching can feel very isolating. You are often the only adult in a room with 20 or 30 people for 6.5-7 hours each day. Getting to be part of a team will not only empower a pre-service teacher, but will also enhance your own teaching.

Make a commitment. Promise your student teacher you will do the following things. Follow through and do them:

To get started, feel free to use/modify this letter as you wish (it is a welcome letter inspired by my weird and wonderful friend, Doug Robertson in his book, "He's the Weird Teacher").

This is one of my 330 (not exaggerating, in fact, that's where I lost count. There are probably 400 of them by now) posts in a series I'm calling "Purge the Draft," wherein I attempt to purge my draft posts by completing and actually posting them. Don't expect these at any regular interval. That's too much pressure.
Posted by Shauna Pollock at 18:45 1 comment:

As the newly hired Educational Consultant and Coach for Netflix, one of my responsibilities is to observe classrooms in action and report on the performance of teachers. Most consultants in non-demand (aka physical schools, those not available on-demand on streaming services) schools do not report their findings publicly. My new role, however, requires that I publish my reports here for the benefit of teachers (non-demand and on-demand alike) around the world. My report includes information (where applicable) about the career of the teacher; positive actions noticed during my observation; areas for improvement and questions or conclusions I am left with. My mandate is to support teachers in creating more experimental, experiential, engaging classrooms that excite learners and make them realize classroom magic. 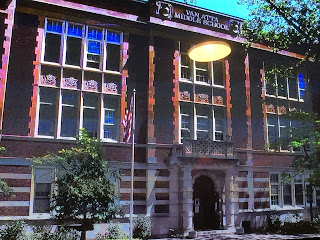 Tonight, I had the pleasure of visiting San Fransciso's Van Atta Middle School. I sat in on Mr. Gerald's eighth grade Science class. I was directed to this classroom via Fuller House, S1.4.

About the teacher: Mr. Gerald has led a long and varied career. He began his career as an insurance salesman (under the pseudonym, Ned Ryerson), directed the William McKinley High School glee club "Rhythm Explosion", was a principal on the Day the World Ended, had a stint as the Assistant District Attorney in Miami, and worked as an FBI Agent.
Stars (things that this teacher did well)
I liked it when:
-Mr. Gerald provided students with a hands-on learning opportunity by having them build models of active volcanoes.
-Mr. Gerald used the whiteboards and blackboard in the classroom to post reminders for his students, including their school name.
-the classroom is set up so that students can work collaboratively.
-safety equipment is provided in the Science Lab.
-when the sprinklers unexpectedly go off in the middle of the class, he embraces a teachable moment by saying, "As you're fleeing for your lives, take notice of how your projects are reacting to the presence of H20."
-students have three requirements for their projects, two of which are clearly posted in the classroom, "Build an 'active' volcano" and "Write a report on the building process." Students also have to share their process orally in front of their classmates. 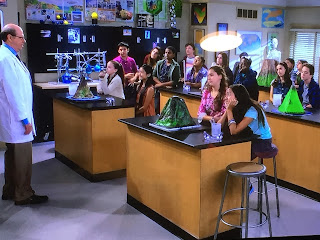 Planets (things to plan for next time - get it, plan-it?)
Next time:
-Mr. Gerald was the last one in the classroom, students were gathered in their workspace several minutes before he arrived. He should work on coming to class on time.
-Mr. Gerald can work on his relationships with students to help improve their engagement. When he entered the classroom and said, "Good morning," they all groaned.
-All of the students had the same expectations and were completing the same project. Mr. Gerald should consider offering students more voice and choice in their learning, allowing them to showcase what they've learned in a self-guided, self-selected manner.
-Despite there being seventeen students in the class, there are only six volcano models. Each student worked independently. I wonder if there is a staggered due date.
-Although their project allows students to show their learning by building a model, their work was expected to be completed as homework. This resulted in one student's mother completing all her work. Even as she shares this with the class, Mr. Gerald only rolls his eyes and does not interfere. If he were to evaluate her project, he would actually be evaluating her mother's work.
-Students should be reminded of when to use their safety equipment, so it doesn't just sit on their tables as they conduct experiments.
-After the fire alarm and sprinklers go off, it takes Mr. Gerald several moments before he reacts and helps students follow fire drill procedures. He seems to be inattentive, as one of his students is able to escape through an open classroom window at this time.
-Mr. Gerald offers an extra credit project that does not require much critical thinking. He asks students to "Summarize the environment around [their] world." He should consider pushing their learning further and asking them, for example, to reflect on how human activities impact the environment around them.
-Mr. Gerald uses sarcasm with his students, and they do not respond positively. He could try other ways to build rapport with them, by getting to know them. There is a new student in his class who he calls only, "the new kid."
-He points at a student and yells at him. Mr. Gerald should practice positive, progressive discipline and not let a student's actions cause him to lose his temper. 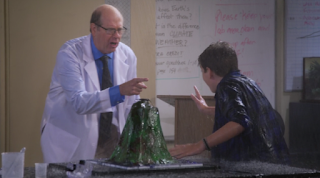 Closing Thoughts
Students often enjoy opportunities to demonstrate their learning through hands-on experiences, like building a volcano, as was the project Mr. Gerald assigned his eighth-graders. Science class provides many opportunities for students to learn experientially and relate their learning to the real world. They can use their scientific knowledge and the scientific process to solve real world problems. Mr. Gerald can take advantage of this to push his learners further. Instead of simply having all seventeen students build volcanoes, he could have each of them select different natural disasters to recreate through modelling and physical or chemical reactions. Alternately, the entire class could contribute a model or component to a 3-dimensional map of different landforms. The classroom could be set up with these models and students could go on a visit a small-scale version of a trip around the world.

Despite his wide variety of professional experiences, Mr. Gerald struggles to manage his students and engage them in their learning. I would like to see him bring more of his own experiences and passions into the classroom. He has experience in a range of fields, including legal work, police work, investigation and musical theatre. These skills could be integrated into his Science classroom. This may awaken the scientific passions of his students and help them to think scientifically instead of simply finishing assignments (or having their parents do their work) to earn a passing grade.

Next time...
Is there a television show or movie you've seen and noticed a classroom that could use a little more magic? Let me know who needs my consulting and coaching in the comments below.


Note: all students and teacher have media permission and their names and images may be shared online.

Note: this is a completely fake job. I do not consult for Netflix in real life. In real life, I consume way too much on Netflix. However, my teacher brain never turns off. I decided to add a bit of creation to all my consumption. If you want real educational consulting and coaching, I can do that for you. Or I can write about your favourite (or least favourite) TV or movie teacher. I'll always have something good to say and I'll always have some ways to improve.
Posted by Shauna Pollock at 18:32 1 comment: