If you've been online in the past 24 hours, you may have seen the ridiculous "news" story that blew up and has my phone buzzing almost non-stop. 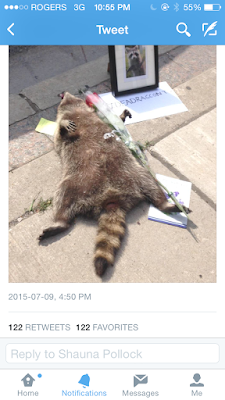 Yesterday, across the street from my new apartment in Toronto, a dead raccoon appeared. I have no idea where it came from and have spent entirely too much time speculating on its origin. What I do know is that something about that dead raccoon captured people's imaginations and its story went viral. The reason I'm writing about it on here is that some photos I took and comments I shared on twitter have become a part of the raccoon's narrative.

My friend, Gillian, was staying with me for a few nights before heading off on an eastern Canada journey and back to her home in Scotland. My life's been even busier than usual lately, and, as always, I slowed down for a couple of days and promptly got sick. Gillian and I stopped at the pharmacy to get Halls. As I was paying at the cash, I noticed a gnarled hand out the corner of the window. Puzzled, I pointed it out to the cashier, she explained that there was a dead raccoon out front and people were giving it gifts. As a lifetime lover of the bizarre, I knew I had to see this with my own eyes. I called to Gillian to follow me when she was done and zipped outside.

If Periscope was intended for anything, it was this. You'll notice lots of citizen detective work and speculation naturally occurred as the neighbourhood came together around the dead raccoon and its continually growing shrine.


If you watch the video, you'll notice I seem like I'm interrupting myself a lot. Apparently when you save a Periscope video it only saves your footage, not the comments and questions people post.
Also, I know that videos are better in landscape. Periscope just works better in portrait.

Still perplexed, I shared a picture on Twitter using the hashtag (that was now spelled correctly). A quick search showed that there had only been a couple of other tweets using #deadraccoonto by that point. I confirmed that the city had, indeed, been notified of the roadkill and that they had responded that they were aware of the situation.

Hours later, after a movie and dinner, we noticed the raccoon was still in the same place, but people had turned it into a candlelit vigil. Once again, I shared via Periscope and then Twitter.


We walked the 120 m back to my apartment (seriously, it's that close, I checked) and watched as #deadraccoonto went viral. My phone didn't stop buzzing for hours as I was notified by Twitter about each favourite, retweet and comment.

Pretty quickly, news outlets started picking up the story and I began to get calls, texts, Facebook messages and tweets from friends and family about Buzzfeed, Mashable, Imgur, BoredPanda and The Washington Post featuring my tweets and name. I can't lie. This was hilarious and giddying. I've never been a part of something that's been shared with so many people so quickly.

However, if you know me at all, you know that, while I do love the bizarre, I equally love analyzing situations. So, if you just came here for #deadraccoonto, hope you enjoyed the post and pics, bye!

If you are here to figure out what lessons I learned from a dead raccoon and going vir-ish (only going a bit viral), read on.

1. People Love a Break from the Ordinary
In the middle of an ordinary day, pedestrians on this busy Toronto street found an unexpected sight and most could not help but stop, make a comment and take a photo. Standing over the dead raccoon, people were talking passionately, they were excited, disgusted and confused. We identified the problem and tried to figure out causes and solutions. Roadkill on its own attracts some attention.
This roadkill was brought to a new level by the imagination of the first person who anthropomorphized it and made people think about what they were seeing. I don't know what came first, the Post-It note telling the raccoon help was coming, the framed portrait, the Get Well card, the rose or the hashtag (though I have theories and there is some photographic evidence online) but each element enhanced the experience for passersby. I can't help but think that, while this wasn't necessarily intentional, #deadraccoonto turned into a pretty fascinating social experiment/art installation.

2. Doing Your Research is Really Important
The first article that I saw about the raccoon came from Buzzfeed and included several photos and tweets, including one of mine. Most of the articles that followed contained the exact same information and photos. Even as the story continued to develop (a donation box was added, more flowers were delivered, candles were lit), articles were published without updated information.
This reminds me how important it is to explore primary sources and not just recycle information that has been published elsewhere.
(Edit: In this article, I'm described as a woman who was "particularly touched by it")

3. You're Always Being Watched
I love sharing my experiences and learning, both personal and professional, into the world on my blog, Twitter and Periscope (and, to a lesser extent, Facebook and Instagram), but it's easy to forget that anyone can see what I post.
This experience reminded me that the things I put into the world can be viewed, shared and interpreted by anyone. This lesson title sounds really creepy, kind of Big Brother-y, but I have kept it that way because, I guess, it is a little creepy. A video was shared online of a city worker looking at the raccoon, clearing a nearby garbage can and driving away. This was filmed from across the street, many floors up. As I viewed the raccoon, I shared what I saw and heard on Periscope.
We live in a world where very little is private. I stress with my students the importance of getting permission to photograph or record anyone, and especially if you are going to share what you've recorded.
Watching back my Periscope videos, I wish I had been more transparent with others that I was sharing what we were seeing publicly.

4. Spelling is Important
It's raccoOn, not raccon. The hashtag was misspelled initially. In the spirit of this collaborative public grieving, someone corrected the spelling. Had she not, who knows if this story would have been shared so widely.
Also, hashtags are so awesome. Students and I create hashtags for events and projects and #deadraccoonto, more than even #iste15, reminded me of the power of discussing a topic and sorting it with a single hashtag.

5. Give Credit Where Credit is Due
It was pretty neat to see my name and photo shared all over the place. When I started seeing people using screenshots of my photos in articles or their own posts without giving credit, I realized that, if I was really proud of what I'd created, I would have been cross. These were photos of an undeniably goofy event, but had these been photos of work my students or I created, I would have felt like they were being stolen.
Several media outlets used my photos and name without ever letting me know. I need to do more research, but I'm assuming that, by posting to Twitter, I'm giving them permission to do so. Others contacted me via Twitter for permission, which just seemed like good manners. The speed of online sharing is so fast that the rules don't seem to be keeping up. Once I put things online, I know that, to some degree, they're not mine anymore. It was interesting to experience that first hand.

6. Goofy Can Lead to Good
Remember the Ice Bucket Challenge? People criticized it, but there's no denying that it raised a lot of money. Surely many people who posted videos didn't donate, but Canadians donated $16.2 million to ALS research because of it.
Right now, mourners of "Conrad" the raccoon are being directed to the website of the Toronto Wildlife Centre to care for orphaned wild animals.
With creativity, a goofy situation can be turned into a good cause.

7. There Are So Many Things I Would Have Preferred Going Viral
Far beyond my love for the quirky, offbeat and strange, I adore my students. There are so many incredible things that they have done that I have wanted to share with the world. We have been very lucky to connect with many people, learn with them and get feedback on our work. We've never gone viral, though. We've never reached a huge audience in a short time. Celebrating the strangeness of humans is terrific. I'm all for that. #deadraccoonto is hilarious. Celebrating the awesomeness and thoughtfulness of kids is way better.
I wish that these stories* had gone viral:
I wish that #spreadthesticky had friends and families texting me, saying they heard about it on the local news.
I wish that #Unicorns4Molly had been featured on Buzzfeed.
I wish that Drallibots got 600 retweets in less than 24 hours.
I wish that Project Thank You was written up in the Washington Post.
All of these stories touched me deeply. I am so proud of the kids who dreamed them up. I wish the whole world knew about their initiatives.

After all this, what I do know is that I'm really happy that social media exists. Being able to share, laugh, question and celebrate the details of life is one of the many reasons I'm happy I live in the future. The opportunities my students and I have had because of social media have been transformative. Please keep sharing, I know I will.

*If you don't like links, here is a quick rundown of the projects listed in Lesson #7:
I have amazing students who have shared about these initiatives online.
1. For Valentine's Day, grade 5/6 students started posting positive messages around the school to spread the love. They wrote their messages on sticky notes and hoped that others would contribute.
2. My hero, Molly Robillard, died of brain cancer in October 2014. She was twelve. I was her teacher for two years. Her best friends wanted to collect 1000 unicorns in her memory. The project was a success, we had more than 2600 unicorns on display at her funeral. We even had unicorns from (Canadian) celebrities Rick Mercer and Chris Hadfield.
3. To raise money in Molly's memory, her friends were inspired by the Brave Bot Molly was given as a gift and kept with her in treatment. We created more than 700 hand-painted robots on dominoes. These robots are programmed to give their owners bravery. They raised more than $1100 for the Children's Hospital of Eastern Ontario.
4. Project Thank You was created by a grade 6 student. He realized that people weren't showing enough gratitude and encouraged them to pass on words of thank you and then pay it forward. When you receive a Project Thank You card, you are encouraged to pass on two more.
See, aren't those EVEN better stories than a raccoon memorial!?
Posted by Shauna Pollock at 22:21 2 comments: